Recently, I decided to put the the you-R-here application on github. Since I normally work in Windows, I setup a quick development environment on my Windows 8 machine at home. I installed Visual Studio 2012 Express, Notepad++, and the node.js install package that comes with npm. While those things were installing I thought to my self, “Self, why don’t I know anyone who develops node.js apps on Windows?”. Self didn’t say anything, so I went ahead and copied the files needed over from my Mac.

I chose not to include my node_modules folder in github, and to make things easier, I created a package.json file that listed the dependencies of the project. Doing so would (should?) allow anyone setting up the project from scratch to just run “npm install” in the root project folder to pull down all of the dependencies.

To test this, I deleted npm_modules and ran ye old command in PowerShell and… AND…

…an error was displayed. As shown in the screenshot above, I was presented with an error message that read…

A heavy sigh followed the error message, but wasn’t displayed on screen. Did I get the format wrong – leave off an ending curly brace or the like? I headed over to jsonlint and pasted the code in. It verified fine. 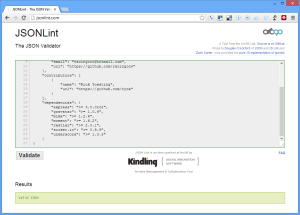 running jsonlint on my package.json file

The only other I could think of that were different than “usual” scenarios were that a) I was using Windows and b) I had created the file in Visual Studio. I couldn’t do much about the first other than switching back to a different OS, so I decided to instead try and create the package.json file somewhere other than Visual Studio. I deleted the file, created it in PowerShell, added it back into my Visual Studio project, added the contents back, and viola! – the dependencies installed and the app ran fine.

Creating the package.json file in PowerShell

Installing the dependencies from package.json 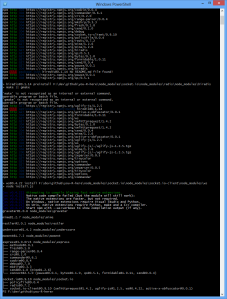 Packages install fine when package.json is created in PowerShell 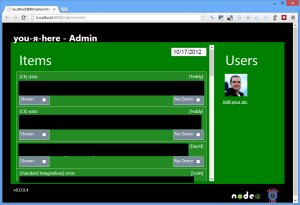 After some poking around, I looked at the encoding of text files created by both Visual Studio and PowerShell (Notepad++ makes it easy to find by highlighting the current encoding underneath the “encoding” menu). As it turns out, npm doesn’t like UTF-8 encoded files (the Visual Studio default), but it does seem to work fine with ANSI (the PowerShell default). 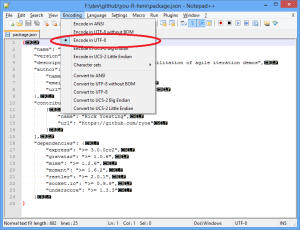 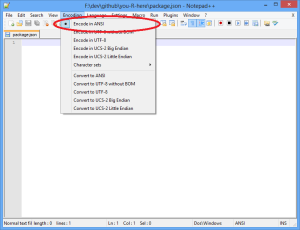 I couldn’t find anything in the npm documentation that stated that the the file needed to be ANSI-encoded, but the moral of the story is to make sure your package.json files are ANSI-encoded.